Sickle cell disorder (SCD) is a serious multi-system disorder affecting 1 in 2000 of all births in England, and is a leading genetic condition both in England and globally. Medical interventions in early life have greatly improved survival of young people with SCD.

Our research showed lack of care at school can undermine the health of young people with SCD, compromise their education, impact negatively on their physical, mental and social well being, and can lead to expensive emergency admissions to hospital.

A Guide to School Policy on Sickle Cell including best practice and an exemplar of an individual health care plan for young people with SCD has been written, and has been released as an open education resource using Creative Commons copyright (CC: BY-SA).

The guide is in use by sickle cell organizations such as the Sickle Cell Society and OSCAR Sandwell. The Guide was explicitly acknowledged as a key influence in the development of a USA guide by the Centers for Disease Control and Prevention [published January 2014]. It has been adapted and translated for use in training teachers in several Brazilian states in 2015-6; by SCORE International, an NGO working on sickle cell in Nigeria; and by the Sierra Leone Sickle Cell Society.

The Sierra Leonean adaption into Krio resulted in the creation of a song to educate about sickle cell. It can be found online: https://sicklecellanaemia.org/ 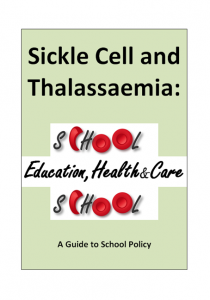